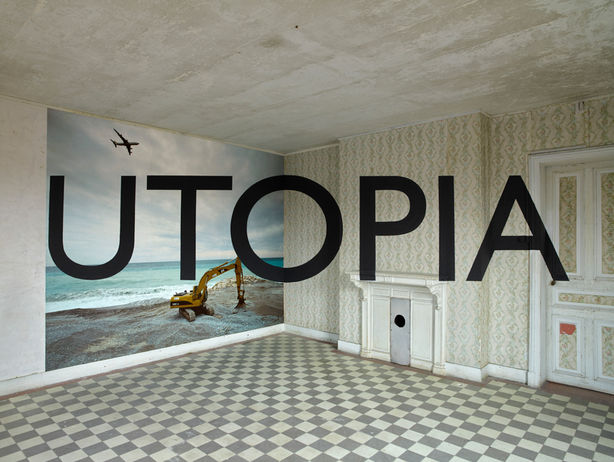 The exhibition in the Familistère of Guise dedicated to Georges Rousse offers a journey through the creation of the artist photographer, from the 1980’s to the present.

A major ensemble of works created in 2014 and 2015 in the Familistère and the Grenouillère in Montreuil-sur-Mer is presented for the very first time to the public. During summer 2014, Georges Rousse answers immediately to the invitation he is being given to come and work in Guise.

The Familistère is one of the social experiment most accomplished attempted since the XIXth century, a tangible utopia that generates once again a great curiosity.

Between novembre 2014 and march 2015, the artist stays in the Social Palace.

He invests the empty appartements in the left wing of the building under construction. In the rooms where that walls are covered with antic wall papers, Georges Rousse’s installs elementary geometric shapes. He then develops series of works created around the word UTOPIA, spread out on large format pictures, personal souvenir photographs, real or fictional, that he introduces for the first time in his work.

The artist photographer also decides to invest in one of the large staircase where he materializes with paint and chalk two wide intertwined circles. Georges Rousse finally moves his workshop under the glass ceiling of the central pavilion, symbolic icon of the Social Palace. There he builds a piece of architecture from the Familistère, an outline of the welcome pavilion, permeable to the void of the large courtyard and crossed by double anamorphosis.

The three delicate squares on green background made in Montreuil-sur-Mer have been realized in La Grenouillere, Alexandre Gauthier’s restaurant’s domain, in the « House of Jeanne » in November 2014.