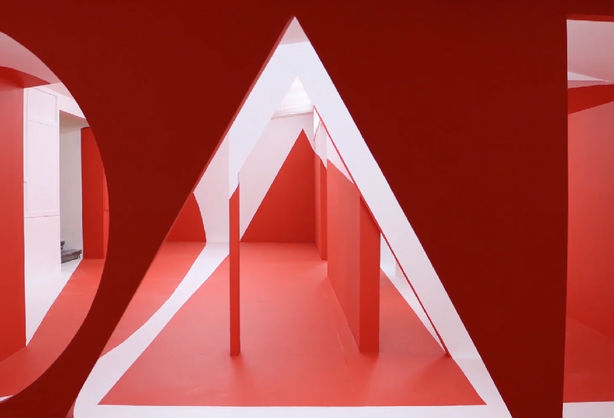 This work is the result of a research made by Georges Rousse between 2013 and 2014, during his residencies in both places, for the Festival Mano a Mano, Miradas fotograficas cruzadas Francia-Mexico, in collaboration with the French Institute of Latin-America (IFAL).

« The idea of this project is to link two neighborhoods of Mexico City. Just as photography is a reproduction tool, i decided to reproduce a real-size replica one of the buildings of the Faro de Oriente.

Then, i will use this ephemeral space as the holder of an anamorphosized work, just like the one that the students from the Faro will be doing in the real building.

I hope to push the people from the surroundings of the Faro to go to the centre of Mexico City to confront the replica of a space that is familiar to them to the walls of the baroque convent of the Laboratorio de Arte Alameda. And in the other way around, for the people of the centre to discover in this great cultural centre for all, a different installation, like a mirror sight of the other : a colorful negative image.» Georges ROUSSE

The Mano a Mano Festival will be held in Mexico City in April 2015, as well as in six other cities, with approximately 15 events portraying the special relations existing between France and Mexico in the realm of photographic creation.

Initiated by the Institut français of Latin America (IFAL) / French Embassy in Mexico within the scope of rekindled Franco-Mexican relations, the expression Mano a Mano, from General Charles de Gaulle’s speech in 1964, is used for this double commemoration, that of the 50th anniversary of his trip to Mexico as well as the 70th anniversary of the creation of IFAL, a Mecca for a cultural dialogue between the two countries.