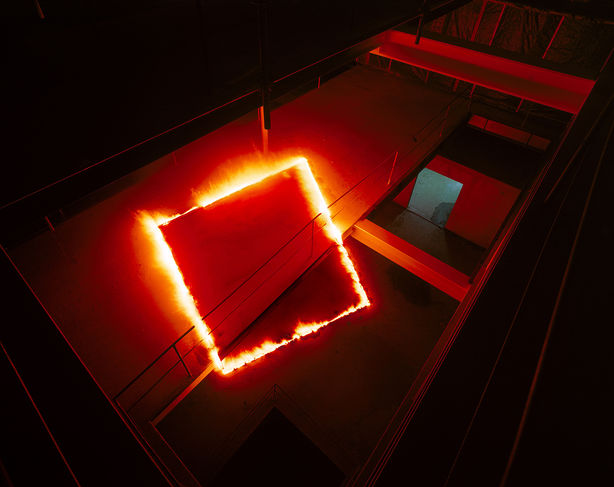 Since the early 1980s, Georges Rousse has maintained his photographic work using formats and subjects that rival with masterful painting. He artfully disguises fictional spaces, rendered with chalk or paint, mostly in abandoned factories or industrial buildings, in the pictorial tradition of trompe l’oeil reproducing imaginary landscapes using existing landscapes.

It is in fact speculating on the possibility of other coherent spaces embedded in existing ones and to manually materialize a three-dimensional one, without digital or virtual means.

The result is a kind of ephemeral demonstrable fiction, formally disclosed by the author himself, through an intermediary anamorphosis, a mirage of visual perception presuming a transgression in the stagnant univocity of reality. This new installation is now available to the public, fixed in time for the duration of the exhibition, with its photographic twin revealing the illusion seen from a single perspective.

The work, in its confusing reading, introduces a disturbing suspicion of the objective space. Its credibility depends upon the author who has defined it, in other words a reality depending on a single eye, but designated by photography for all to see. Fire, Red & Black - the title of the exhibition - pertains to the essence of the space, the red fire of the forge, black for the darkness of the hollow, with, on the ground-floor, a central pictorial and sculptural installation and Thiers 2014, its photographic matching piece.

On the upper floor are a dozen of these masterful large format works in variations on the same theme. Some date back to the genesis of this approach in the 1980s, with ghostlike characters spreading through space before attaining pure spatiality.

Yet unseen and exceptional works: essential elements of Georges Rousse’s itinerary, are on display to the public, with a video interview of the artist conducted during the installation of the exhibition.

The works on the first floor date from the 1980s to the 2000s, set on to aluminium framed composite panels. Entrepôt vichy [vichy warehouse] is the title of a large screen-print 1982 (300 x 400 cm) glued directly on to the picture rail.

After the Plateau in Lyon in the spring of 2014, the summer exhibition at the Contemporary Art Centre of Thiers ends the itinerary that began in January this year, at Shivaji Nagar Slum in Mumbai. There, with the help of the Indian NGO APNALAYA in a volunteer initiative, Georges Rousse has involved youths from the slums of Mumbai and from France in his creations.