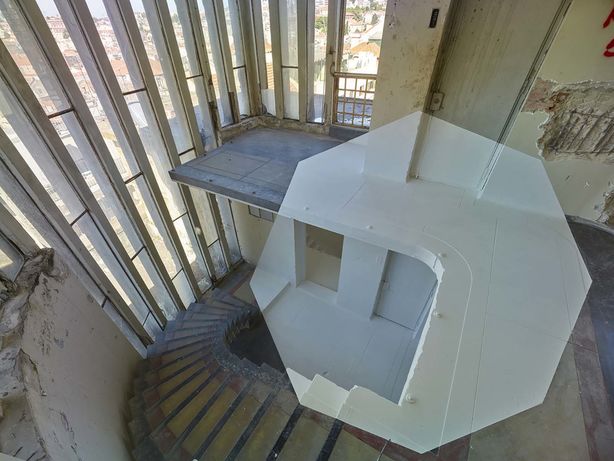 An international artist and tireless traveller, Georges Rousse has spent the last two years working in Lima in Peru, in Kochi in India, in Shodoshima, an island in the Japanese Inland Sea (a project for the 2019 Setouchi Triennale), in Lisbon in Portugal, and in France.

So many very different places and projects - a building undergoing renovation in Portugal, an industrial area in France, and buildings with traditional architecture in Asia - which he worked on using various media: painting, chalk, and pages from newspapers whose images are obscured. There is a continuous quest to enhance space through light, colour, and the insertion of more or less complex geographic forms, created through anamorphosis. The photograph's unique viewpoint determines that of the viewer and the photograph immortalises the installation, which is generally ephemeral.

But the transformed space could have been different, which is the idea behind Georges Rousse's watercolours.

Drawing has always been a part of his creative process. Watercolour enables him to project himself into the available space and think of different ways of enhancing it, without any restrictions. At this stage, the envisaged forms, colours, and materials are only governed by the quest to enhance the place and the quest for light.

In his recent drawings Georges Rousse has changed the format, partly abandoned his Moleskine sketchbooks, which he has used until now, and replaced them with large sheets, moving even further away from the idea of preparatory work.

In certain watercolours the freedom to imagine, facilitated by working on paper, transcends the reality of the place.
Georges Rousse practises mental projection, in which the forms he creates for these places extend beyond their real space.
Identifying the various possible in situ views of his anamorphoses, he sometimes endeavours to simultaneously create the different viewpoints that the viewer might have when viewing the installation, making the deformation of the image visible.

The drawing is not transposable as it is into an installation and is purely imaginary. But it expands the artist's - and therefore the viewer's perception of the space - he is questioning.