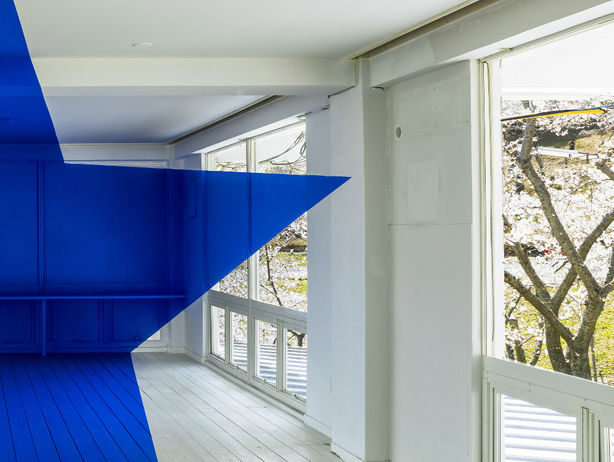 For this new personal exhibition of Georges Rousse, the Gallery Catherine Putman has chosen a series of photographs and drawings around the motif of a star which appeared in his work in 2013.

After the circle and the square which characterise the artist’s graphic vocabulary, the geometrical form of a five-branch star is a new proposition within the field of drawing in space created by its anamorphoses.

Beyond the obvious complex plastic features typical of this form realised by the artist in the depth of the space, a star has of course strong and pluralistic symbolic meanings, of which the first possible one is that of light, the central question in the work of Georges Rousse.

The exhibition presents therefore, through a selection of watercolours and photographs, three very different accomplishments.

The Gallery will present as well its latest publications, the photographs of recent installations reflecting his work across the world.

In Phnom Penh, Cambodia for the Photo Phnom Penh Festival in 2012 ; in Marseille in 2013, for Marseille-Provence, European Capital of Culture, at the abandoned sanitary post ; in Seoul, 2012, at the Seoul Art Center where a large exhibition was dedicated to him ; in Bordeaux in 2014, at the submarine base, where the exhibition Georges Rousse: Espace(s) - Métamorphoses poétiques took place until the 14th of December, 2014.